Veni, Vidi, Vici – New Study Looks at the Personality of People Who Would Prefer To Win an Argument Rather Than Compromise 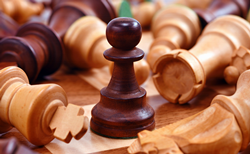 People who would rather win an argument than compromise may be motivated by a need for control and simply push until they get what they want.

If all you do is fight to win, regardless of the cost, you end up losing in the end.

Conflict is unpleasant, uncomfortable, loud, and vocal – but it can be so much worse when both parties go into it with the sole intention of being proven right. Without compromise, conflict can drag on incessantly, or rise from the grave to haunt every subsequent argument where parties hash out grievances from decades ago. Why is it that some people would rather win a fight at any cost than make concessions? According to research from PsychTests.com, a dislike for compromise is about more than just the pursuit of victory or bragging rights.

Analyzing data collected from 12,259 people who took the Emotional Intelligence Test, PsychTests’ researchers compared the personality, attitudes, and behaviors of people who would rather win an argument vs. those who would rather compromise. Here’s where they differed:

PEOPLE WHO WANT TO WIN AN ARGUMENT TEND TO HAVE A CYNICAL ATTITUDE TOWARDS LIFE.

PEOPLE WHO WANT TO WIN AN ARGUMENT CAN BE UNSCRUPULOUSLY OPPORTUNISTIC

PEOPLE WHO WANT TO WIN AN ARGUMENT TEND TO DWELL ON NEGATIVE THOUGHTS, FEELINGS OR PROBLEMS

PEOPLE WHO WANT TO WIN AN ARGUMENT TEND TO HAVE AN INTENSE NEED FOR CONTROL, TO BE IN CHARGE, OR TO BE RIGHT

“Imagine what would happen if every person taking part in a peace talk or major negotiation went into it with the sole intention of winning, regardless of the cost – it would lead to chaos. Life isn’t a game show where only one person can come out victorious,” explains Dr. Ilona Jerabek, president of PsychTests. “The same applies to conflict. Evidently, there will be circumstances where there is no room for compromise. In most cases, however, meeting someone halfway, making concessions, and finding a mutually beneficial solution is the ideal path. If all you do is fight to win, regardless of the cost, you end up losing in the end – either the deal or negotiation itself, and most certainly your relationship with the other person. Unfortunately, some people mistake compromise for weakness; they feel that compromising is taking the sucker’s way out. In reality, finding a solution that benefits everyone is what takes the most work, strength, and dedication.”

Want to assess your EQ? Check out the Emotional Intelligence Test by visiting: https://testyourself.psychtests.com/testid/3979

Professional users, such as HR managers, coaches, and therapists, can request a free demo for this or other assessments from ARCH Profile’s extensive battery: http://hrtests.archprofile.com/testdrive_gen_1

PsychTests AIM Inc. originally appeared on the internet scene in 1996. Since its inception, it has become a pre-eminent provider of psychological assessment products and services to human resource personnel, therapists and coaches, academics, researchers and a host of other professionals around the world. PsychTests AIM Inc. staff is comprised of a dedicated team of psychologists, test developers, researchers, statisticians, writers, and artificial intelligence experts (see ARCHProfile.com).

Kylie Jenner confirms she is pregnant with second child

Prev Next 1 of 457
Join the Newsletter
Sign up here to get the latest news delivered directly to your inbox.
You can unsubscribe at any time